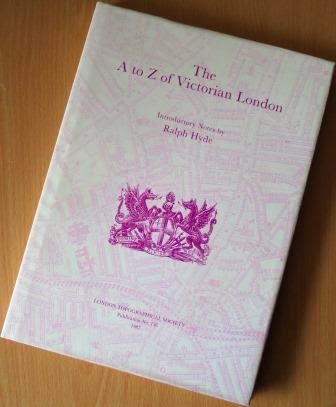 The A to Z of Victorian London is a handy reference for making sure you haven't placed a twentieth-century street or building in the middle of a manuscript set in the nineteenth century! Published by the London Topographical Society in 1987 with introductory notes by Ralph Hyde, this intriguing map book is based on the New Large-Scale Ordnance Atlas of London & Suburbs with Supplementary Maps, Copious Letterpress Descriptions and Alphabetical Indexes by George Washington Bacon in 1888.

A Man and his Maps

George W Bacon first established his business on Paternoster Row, a street of printers and publishers near St Paul's Cathedral. In addition to selling maps he had an interest in domestic machinery and was known to sell sewing-machines as well as his patented domestic gymnasium! He became a Fellow of the Royal Geographical Society and was also involved in education at a time when it became compulsory for children, aged 5-13, to attend school. As new schools opened there was increased demand for the various teaching aids which he came to publish. Bacon offered an award of £20 in prizes alongside an offer of employment to boys who could produce the best map drawings. During this period large parts of the city underwent change. Construction due to Blackfriars Bridge; the Victoria Embankment; Smithfield's Market; new law courts in the Strand; Victoria Tower Gardens near the Houses of Parliament; Brompton Oratory; Holborn viaduct; Shaftesbury Avenue; Charing Cross Road; and the Inner Circle Underground drastically altered the face of London.

In contrast to other maps at the time, the New Large-Scale Ordnance Atlas of London & Suburbs with Supplementary Maps, Copious Letterpress Descriptions and Alphabetical Indexes provided a monumental amount of detail including county courts, hospitals, workhouses, wash houses, theatres, hotels, liveries, and men's institutes. There was even a building marked 'Panorama' which was to house Philippoteaux's panorama of Niagara Falls. Rifle ranges on Wormwood scrubs, a number of cricket grounds, and suburban areas that were about to merge into the metropolis were but a few of the minutiae that were the hallmark of Bacon's map. The British Library catalogued almost 400 maps from Bacon, most of which were unremarkable in comparison to maps produced from his competitors. However, the 'New Large-Scale Ordnance Atlas' was exceptional in both the scale of London, and the quantity of detail, it covered. It is an invaluable resource for any historian, interested Londoner or writer of nineteenth-century-set tales!

This blog post was written in the spirit of the April 2014 A-Z Challenge whereby a post is written every day during the month of April (with the exception of Sunday). The theme of each post is meant to correspond with a letter of the alphabet in sequential order. Tomorrow's post will be on N. For details and to visit the A-Z Challenge website, click here.